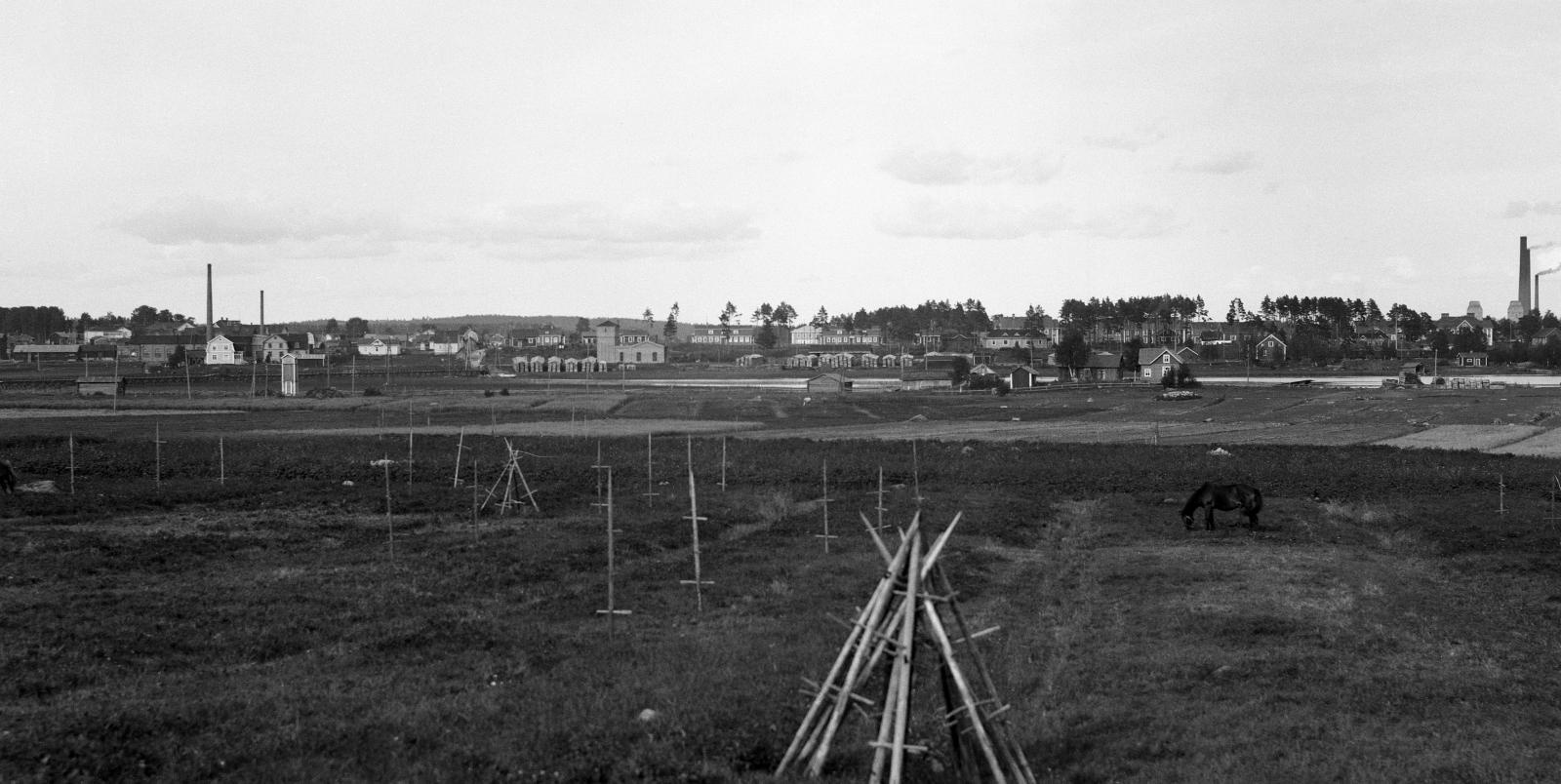 A. Ahlström Oy invested heavily in its production facilities in Varkaus in the 1910s. High inflation rates during the World War helped the company repay the loans. (Ivar Aleksander Ekström/Varkaus Museum)

In the Russian empire, Finland was a special case with its own national economy. Finland and Russia had a customs border, and the Russian government restricted the access of Finnish products to the Russian market by imposing duties on them. Beginning from the 1880s, the Finnish government (the Senate) had favoured the establishment of trade relations with Western Europe. Before the First World War, more than two thirds of the Finnish imports and exports were with countries other than Russia.

Once the World War broke out, exports to Western Europe virtually ended, with the exception of Sweden. Russia became Finland’s largest trading partner. Between 1914 and 1916, Russian demand for military equipment brought a lot of business and work to Finnish companies.

The value of the Finnish Markka fell as a result of the inflation caused by the World War to 9 per cent of its value in 1914. The decline in value was three times more than in Sweden or Britain. However, the value of the Markka stabilised in the early years of independence, and Finland did not experience the same kind of hyperinflation as Germany.

In 1914, the Finnish gross domestic product was about 70 per cent of the Swedish GDP. During the World War, Finland’s GDP declined to half of the Swedish figure. In both economies, the growth rate was high before the Second World War. Finland was, however, catching up with Sweden in terms of living standards. At the end of the 1930s, Finland’s GDP was about 80 per cent of that of Sweden.

The economy was recovering quickly in 1919

The Finnish economy was quickly back on its feet in 1919 when exports to Western Europe started again. The industrial structure in Finland contributed to the recovery. There was a lot of demand for wood-based products in Europe after the First World War.

Finland’s most important export products were paper and sawn timber. Before and during the First World War the Finnish paper industry had made large-scale investments. Paper had been exported mainly to Russia, whose own factories were unable to produce the same high quality newsprint.

Demand was also high in Europe before the First World War. Newspaper volumes had increased during the war years, and people’s hunger for news was great also after the peace.

The Finnish sawmill industry had existing export contacts with Western Europe. When export opportunities opened up, the sawn timber stocks were relatively large. The capacity of the sawmill industry was also at a high level.

In the mid-1920s, the value of wood processing products accounted for 85 per cent of Finland’s exports. The most important export market was Great Britain. The importance of Germany increased after the country recovered from the economic catastrophe of the early 1920s.

The effects of the global economic recession were felt in Finland at the turn of the 1920s and 1930s. Reduced demand for forest industry products affected the countryside, where the income from the sales of raw wood was important to farm owners. Logging was also a major source of income for the rural working population. After the recession, increased demand for forest industry products helped Finland to surmount the country’s economic plight faster than most parts of Europe.

The export of butter continued throughout the 1920s

Before the First World War, Finland had exported significant quantities of butter to Britain and Denmark. During the First World War, dairy products were mainly exported to St. Petersburg. The rapidly growing city absorbed all the Finnish milk and butter that could be exported. Exports declined in 1917 due to the food shortage and ceased altogether after the October revolution.

After the independence, production picked up fairly quickly. The recovery of agricultural production was contributed to by a land reform, which enabled tenant farmers to redeem their farms at prices based on the 1914 value of money. The state supported the land reform by offering long-term loans.

The importance of butter exports diminished when Finland started to emphasise self-sufficiency in its agricultural policy. A serious food crisis had emerged in Finland during the final stages of the First World War, when grain imports from Russia ceased. Finland introduced import duties for cereals, so that production of grain became profitable. Rising living standards, in turn, increased domestic demand for butter. Finland’s agricultural exports began to decline in the late 1920s and came to a halt during the shortage in the 1930s.

Photo: A. Ahlström Oy invested heavily in its production facilities in Varkaus in the 1910s. High inflation rates during the World War helped the company repay the loans. (Ivar Aleksander Ekström/Varkaus Museum)

mented in 1951 as the ASLA scholarship programme. The Finnish government has continued financing the programme after the loan was paid off.

Finland paid off its war debt

Finland received a lot of positive attention in the United States in the 1930s as an honest debtor. In the spring of 1919, the Finnish government had taken out an $8 million loan for grain purchases.

Arriving in Europe in November 1918, Herbert Hoover, who was in charge of food affairs, estimated that the Finnish food situation was as good as in the Scandinavian countries. The country needed a little help, but basically it could manage on its own. However, the information provided by Rudolf Holsti, the Finnish chargé d’affaires in London, changed Hoover’s and his subordinates’ opinion. In December 1918, Finland was estimated to be on the verge of hunger and a large part of its population was threatened by starvation by spring. Finland received grain at the last minute, and famine was avoided.

The Finnish government continued to pay back the debt during the economic recession of the 1930s, even though the United States granted its debtors a grace period of one year. The exemption was for the year 1932 and it was pushed through by the then president Herbert Hoover. The exemption also applied to “Hoover’s Food Loan” received by Finland from the US in 1919.

The countries that were granted the grace period stopped the loan payments in 1932 and 1933 – with the exception of Finland, which continued payments in accordance with the agreed payment schedule. Economically, these payments had little significance to Finland and, in particular, the United States. The loan to Finland accounted for 0.08 per cent of the eleven billion dollars of war loans granted by the United States.

However, Finland’s decision to pay off its debt turned out to be of great worth after all. It achieved enormous publicity in the US press, which published almost 3,000 news items dealing with Finland’s debt payments or Finland in general between 1933 and 1936. In addition to small pieces and cartoons, many major newspapers published multi-part reportages about Finland. An interview with Risto Ryti, the Governor of the Bank of Finland, achieved wide circulation in 1934. Ryti’s carefully thought-out message aroused admiration across the United States: “We signed a contract. We promised to pay. It is the only honest thing to do.”

Paying back the debt honourably helped Finland later during the Second World War. The goodwill effect continued for decades even after the war. The Finnish government paid the final instalment of its food loan at an accelerated schedule on 15 June 1976. As early as in the late 1930s, a proposal was made to redirect the loan payments to a scholarship fund promoting cultural and scientific exchange between Finland and the United States. The fund was implemented in 1951 as the ASLA scholarship programme. The Finnish government has continued financing the programme after the loan was paid off.