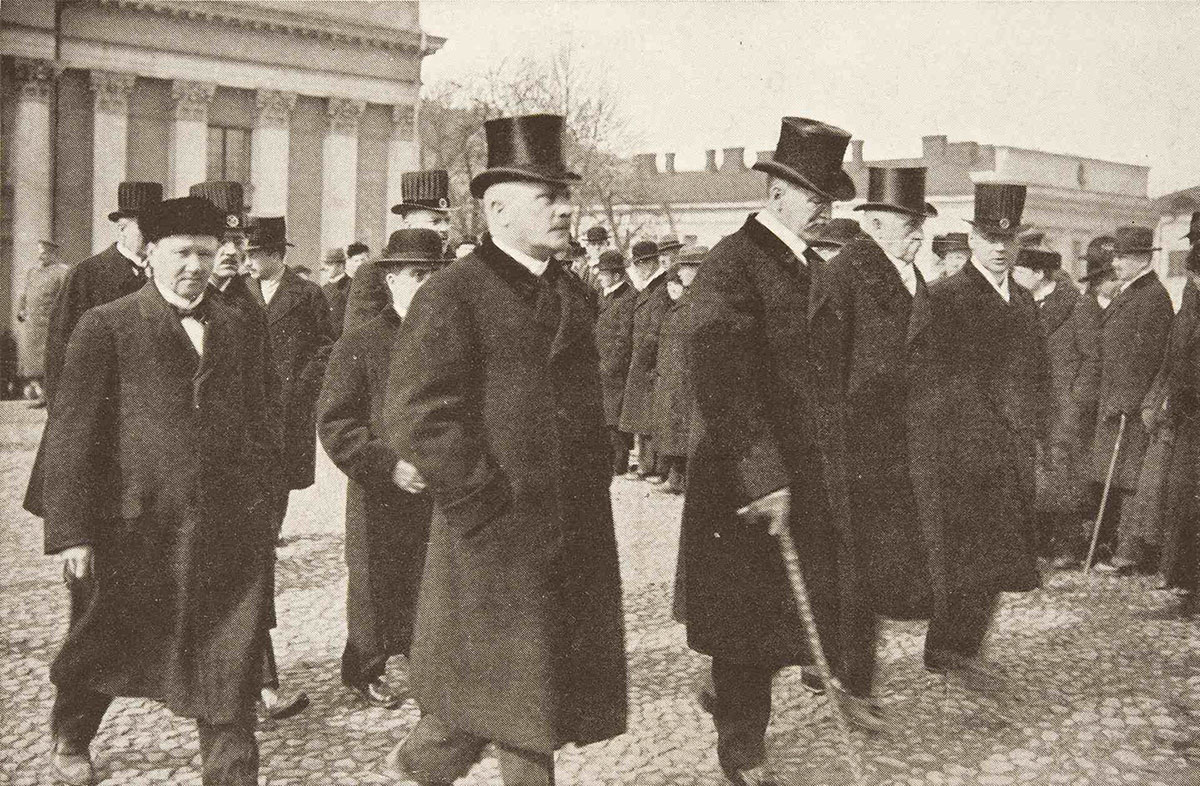 The Senate, led by Oskari Tokoi, on their way to the opening of the parliamentary session at the former Imperial Palace on 11 April 1917. Prime Minister Oskari Tokoi on the left. (National Board of Antiquities)

The Social Democrats found it hard to accept governmental responsibility because, in principle, the party renounced “ministerial socialism.” On the other hand, they found it hard to stay out of government because of the Russian revolution, the simple parliamentary majority brought by the election victory of the summer of 1916, and the changed social situation.

On 24 March, the SDP party committee and the delegation of non-socialist parties approved the Senator list of Tokoi’s Senate. The new Senate comprised six socialist and six non-socialist members. Oskari Tokoi of the SDP, Chairman of the Finnish Trade Union, was elected Vice Chairman of the Senate Finance Department (in modern terms, Prime Minister).

The formation of Tokoi’s Senate reflected the mood of the March revolution. There existed widespread hope of improving conditions and opportunities for cooperation, even though the friction between the Social Democrats and non-socialist parties was becoming visible once the initial enthusiasm began to fade.

The non-socialists were cautiously hopeful of the Senate. For them, it was important that the Social Democrats were sharing the responsibility.  Oskari Tokoi became Prime Minister in the first parliamentary government of Finland, and the first socialist prime minister in the world.

The main topics in the government programme of Tokoi’s Senate were social and economic reforms, such as resolving the crofter question and enforcing the Prohibition Act. In addition, the Senate had other objectives on its agenda, such as labour reforms, a new municipal law, laws on compulsory education and freedom of religion, and a social insurance system. The food shortage, which got worse week by week, required immediate action.

State independence was not on the Senate agenda. However, the Senate aimed to broaden Finland’s autonomy and to abolish the Russian government’s veto power over decisions made in Finland.

A committee was set up on 31 March 1917 to discuss Finland’s situation.

Senate has less and less room for manoeuvre

Starting from April, the escalating social conflicts weakened the position of Tokoi’s Senate day by day. After the March revolution, it was once again possible to organise strikes and demonstrations, which had been banned since the First World War.

On 18 April, the labour union movement started to use strikes to campaign for an eight-hour working day. In May, the strikes expanded to include farm and forest work in addition to factory work. Disputes about wages resulted in strikes as well.

Growing unemployment and the food shortage added to people’s discontent, particularly in cities. The grain imports from Russia dwindled in the spring of 1917. The new Food Act enacted in May 1917 remained ineffective because all practical decisions were made in cities and municipalities, where power was used by the wealthiest residents. Tensions were rising also because of the increasing unemployment, caused by the decline in Russian demand for military supplies and fortification work.

The question of how to secure the rule of law divided the Senate, with Allan Serlachius, the head of the Bureau for Civilian Security, seeking to get rid of law enforcement built on labour organisations. The Senate also had to reconcile local disputes. Unruly behaviour among the Russian troops increased. The growing influence of both Bolsheviks and anarchists among the troops deployed to Finland adds to the instability.

The question on relations between Finland and Russia topples the government

The question on the division of the supreme power between Finland and Russia, which became topical after the Russian revolution, led to the downfall of Tokoi’s government. The parliament passed a so-called Power Act, which proclaimed the parliament as the supreme authority in Finnish affairs, with the exception of foreign and military affairs. In response, the Russian provisional government, led by Alexander Kerensky, issued a manifesto for the dissolution of the parliament.

Tokoi’s Senate became divided on the question of how to react to the provisional government’s declaration of the dissolution of the parliament. In socialists’ view, the provisional government had no right to dissolve the parliament and announce new elections, so they opposed the publication of the manifesto. The non-socialists were in favour of publication. After a vote, won by the non-socialists, supported by Governor-General Mikhail Stakhovich, the Senate Chairman, the Senate decided to publish the declaration.

Senator Vuolijoki, a Social Democrat, resigned on 17 August. The rest of the Social Democratic senators followed on 8 September. After that, Finland was governed by a so-called “stub senate” led by E. N. Setälä.