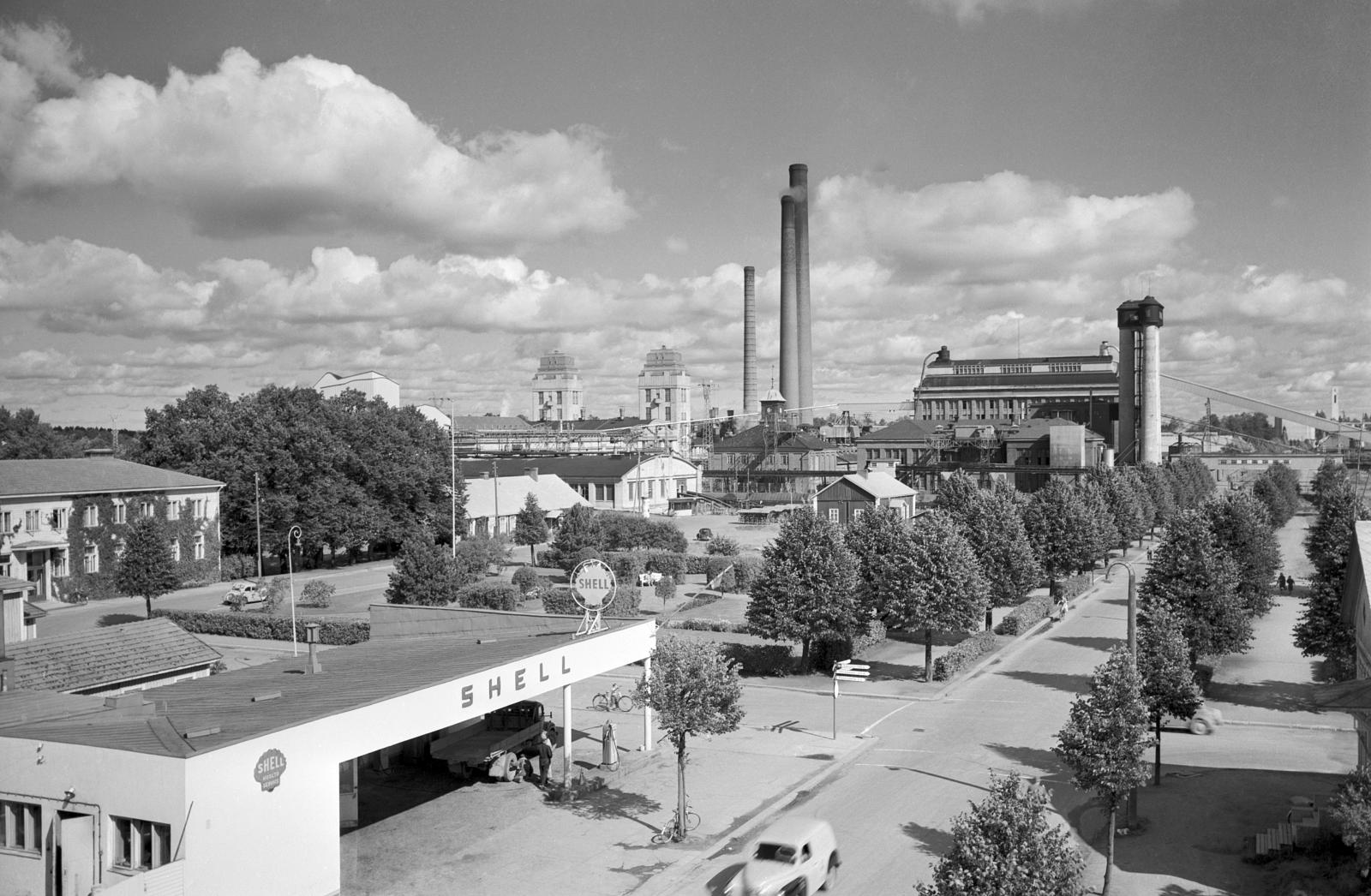 Wood processing has played a key role in Finland’s exports since the 19th century. A photo of A. Ahlström’s Varkaus mills in the 1950s shows the Walterin puisto park and Ahlströminkatu street named after Walter Ahlström. (Collections of Valokuvaamo Jänis / Varkaus Museum)

During the hundred years of Finnish independence, the biggest changes have been urbanisation, demographic change, rising educational levels, improved standard of living and productivity growth.

When Finland became independent, its population had exceeded three million. The birth rate declined sharply in the 1920s and it looked like the population would not reach four million. However, the post-war birth rates – 100,000 children born annually – increased the population to more than four million in 1950, despite the fact that more than 90,000 Finns – mainly young men – had been killed in the war.

In the 2010s, the birth rate has been in decline. The number of children born is at the same level as in the 1840s, when there were a little over two million people living in Finland. From 1969, the birth rate in Finland has remained below the natural regeneration rate of population, which is 2.1 children per woman. In 2016, the number of deaths exceeded the number of births. However, Finland’s population continues to grow due to immigration and is about 5.5 million.

Despite the decline in birth rate, the population of Finland has been growing, thanks to increased life expectancy and, since the 1990s, immigration. The number of Finns exceeded five million in the early 1990s, despite many Finns moving permanently to Sweden in the 1960s and 1970s.

In 2017, there are 5.5 million people living in Finland. The population of the country is 1.7 times bigger than when the country gained independence. Other countries of the same size include Denmark, Norway, Slovakia, Singapore and Eritrea. Of the world’s population, 0.075 per cent are Finns.

The mortality in children under one year old has decreased dramatically. When Finland became independent, every tenth child died during their first year of life. In the 2000s and 2010s, less than 0.5 per cent of infants die before their first birthday.

Those over 65 account for a fifth of the population. The number of people under the age of 25 is roughly the same as in 1917, but their share of the population has fallen from 50 to 28 per cent.

Finland is a country of multiple languages and religions

The linguistic and cultural rights of Sámi, Roma and Sign Language are mentioned in the Constitution. The law on the use of the Sámi language mainly applies to the municipalities of Enontekiö, Inari, Sodankylä and Utsjoki.

In 2012, 89.7 per cent of Finns spoke Finnish as their mother tongue and 5.4 per cent Swedish. Especially in the larger cities there live many people with origins all over the world. Russian speakers account for 1.2 per cent of the population – the figure is a little higher than when Finland was part of the Russian Empire.

For the first 75 years of Finnish independence, the position of Lutheranism was unrivalled. Resignation from the Church increased during the recession years of the 1990s and has been on the rise since 2000. In Helsinki there are now areas where less than half of the inhabitants are members of the Church.

From agrarian to urban

Urbanisation has been rapid in Finland since the 1950s. For a long time, Finland was one of the least-urbanised countries in Europe. Over 80 per cent of Finns lived in rural areas when the country became independent. In the 2010s, 83 per cent of Finns live in an urban environment. The proportion of the rural population was declining steadily already before the Second World War, but it was in the 1950s that the rural flight really gained momentum. At the same time, the population in rural municipalities began to concentrate in built-up areas.

The level of education has risen rapidly in recent decades

The Finnish level of education started to rise when Finland became independent. In the 1930s, all children attended at least primary school. At the same time, the number of grammar schools increased significantly. After the war, middle and grammar schools were established in large numbers, which increased the proportion of grammar school students to 40 per cent of the age group by 1960. The development of vocational training also gained momentum. From the late 1950s on, new universities and colleges opened up the academic world to more and more people.

The comprehensive school reform in the 1970s ended the division of the education system into primary schools and grammar schools. The purpose of the nine-year comprehensive school was to provide the same starting point and education for the entire age group. A major change was the expansion of language teaching to the whole age group. Most Finnish children have learnt English as their first foreign language. In addition, all have studied the basics of the other national language.

The level of education in Finland has increased especially in the last 40 years. In 1970, three out of four Finns did not have post-basic education. This applied in particular to 55-to-64-year-olds: people born in the early 1900s rarely had the opportunity to attend higher education.

The number of Finns with a degree from a polytechnic, college or university has increased the most – it has more than quadrupled between 1970 and 2010.

In 2017, two of Finland’s most important trading partners are the same as before the First World War – Germany and Russia. On the other hand, the significance of Great Britain, which once was one of the most important export and import partners with Finland, has somewhat diminished. Sweden has reached a position alongside Germany and Russia among the top three trading partners. China’s significance in foreign trade has grown since the 1990s.

Trade with Russia has both benefited Finland and caused turbulence in the economy since the late 19th century. Imperial Russia sought to protect its own industrial production by imposing duties, which also applied to Finland. The exports boom experienced before independence quickly changed into complete disappearance of the Russian market.

The Soviet Union became an important trading partner after the Second World War. The collapse of the socialist system in the early 1990s brought about the downfall of many Finnish companies that had traded with the Soviet Union. From 2014 on, Russia’s Ukrainian policy has caused uncertainty.  Russia has responded to the European Union’s economic sanctions by restricting imports from EU countries, which has reduced exports from Finland to Russia. The weakening of the ruble also reduced Russian tourism in Finland.

Transportation has moved to the roads

Transportation has largely shifted from the railways and inland waterways to roads. In 2015, there were over three million cars in Finland. In 1920, there were 1,800 automobiles and 800 motorcycles in the country.

The importance of automobiles increased initially in freight transport and public transport. The number of passenger cars started to increase rapidly when their imports were freed from currency regulation in the early 1960s. In 1976, there were a million cars in Finland. The two million mark was reached in 1998 and the three million mark in 2012. In 2015, there were 3.2 million cars in Finland.

A rare leap from poverty to wealth

Finland is one of the relatively few poor countries that managed to reach the level of income of the richest countries in the 20th century. A hundred years ago, Finland was a fairly poor agrarian country with a GDP per capita that was half of that of Great Britain and the USA, which were the wealthiest countries in the world at the time. The Finnish GDP was just above the world average.

In a hundred years, Finland has been transformed first into an industrialised country and then into a post-industrial information society, in which the majority of people find employment in the service sector. The rise in the standard of living is explained by productivity gains. In 2004, Finland’s gross domestic product per capita was 22 times higher than in 1860. However, the number of hours worked per capita has remained virtually the same.

From 1917 to 2007, private consumption increased eleven-fold. At the time when Finland became independent, almost 90 per cent of the income of an ordinary citizen was spent on necessities. Consumption increased continuously from the beginning of the 1950s to the late 1980s. During the recession in the early 1990s, consumption fell sharply. Between 1998 and 2006, consumption grew by a fourth, after which growth has been slow.

Finland’s GDP fell by 8.2 per cent in 2009. The drop was as large as in the hunger year of 1867, although the effects were not nearly as dramatic. In Finland, the situation was complicated by the financial difficulties faced by many European Union member states, which have been reflected in the whole community. The impact of the economic sanctions imposed by the EU on Russia after the occupation of the Crimea was also significant for the Finnish economy.